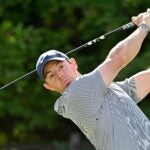 Rory McIlroy hits his tee shot on Saturday on the 17th hole at St. George’s.

Over the next weeks, months and quite possibly years, you’re going to be hearing a lot about “entertained.” But wait, you say. Don’t you know the show you’re watching when you flip on the golf course, or pass through the gate? That’s true. You’re not going to see a dunk or a touchdown, though now you can sometimes see Charles Barkley and Tom Brady. Still, that doesn’t mean you should sit on your birdies and eagles, and that’s the message that will be spun from this crowd that hopes to turn golf on its head, the LIV Golf Invitational Series. On Saturday, they completed their first-ever tournament and, along the way, trotted out shotgun starts and neon-colored leaderboards that let out video-game dings, and big cash prizes.

Say what you may, but all of that is different and makes you curious. But a few things are also in play here. One is that last item, the money, which you have undoubtedly heard about by now, though we will repeat it. LIV’s funding is Saudi-based, and LIV’s biggest name explained what that means when Phil Mickelson told biographer Alan Shipnuck his backers were “scary MF’ers.” Still, thousands watched LIV play this weekend, so here we are.

Which brings us then to the actual golf. Over in London, LIV crowned Charl Schwartzel his first-ever champion. And CBS’ Jim Nantz described his recent resume as such on Saturday: “Charl Schwartzel with his first win of any kind in six years, ranked 126th in the world, he was the victor of this 54-hole event of the tour that’s Saudi backed .” It’s here where we’ll note that the lower-ranked players do often win events, though finishing immediately behind Schwartzel were Hennie Du Plessis (No. 133 in the world), Branden Grace (No. 123) and Peter Uihlein (No. 327 ).

And the competition? At the Canadian Open, the PGA Tour’s stop this week, the third-round leaderboard on Saturday read as follows: 1, Tony Finau; 1, Rory McIlroy; 3, Justin Thomas; 3, Sam Burns. The first three will all be in the same final grouping on Sunday. You don’t have to scroll far to find their rankings: Finau is the lowest. At 18.

And the Tour’s de facto spokesman did the math during this exchange:

Reporter to McIlroy: “With everything that’s gone on in the golf world this week, is there anything in that that would make a win tomorrow feel sweeter or perhaps more significant?”

McIlroy to reporter: “Not necessarily. Every win is sweet, and every win’s significant. I don’t even think personally, for me, like it would be great to win, but I think what a success this tournament is anyway. You look at it out there today. I mean it’s certainly the best atmosphere of any golf tournament going on this week.

“Yeah, the crowd support is incredible, and yeah, I’m pretty sure what’s going to happen over the final 18 holes here is going to be more entertaining than what other golf was played this week anywhere else.”

Ouch. That last sentence hits where it hurts. If you’re a LIV fan, he’s got you there. If you’re a PGA Tour stan, you’re happy you got McIlroy. And Thomas. And Finau. And Burns. And a cool hockey-themed viewing area this week on the 16th tee at St. George’s. (They’re playing in Canada, remember.)

LIV play will get better. US Open champion Bryson DeChambeau is signed up and will play in the next event. On Saturday, Masters winner Patrick Reed and fan favorite Pat Perez confirmed their services. Should more lesser-known players cash in, the argument is more big names could follow.

On the Tour side, it won’t have a world-class leaderboard every week. And its wars are well known. But on this Saturday, where, if you believe that first impressions are everything and that LIV needed to capitalize because of that, it was McIlroy who was being entertained — by his group at its finest.

And had Thomas feeling…cheesy. A reporter had asked him this: “At one point today, I think there were seven players in the top 25 in the world ranking in the top of the leaderboard; it’s moving a little bit. What do you think that says about this tournament and specifically about the PGA Tour, what it can deliver in terms of entertainment?”

“Yeah, it’s really cool,” Thomas said. “Obviously with everything going on — this week was going to be very special regardless — but I think it just, I mean it makes, I mean, without sounding cheesy, it makes me pretty happy inside seeing this. There’s no other place I would want to be playing, and it’s just, obviously with a tournament like this and the history that it has and how long it’s been played, had a lot of great past champions and venues and drama.

“And it looks like it has a potential tomorrow to produce a little bit more of that and create some more history.”

Nick Piastowski is a Senior Editor at Golf.com and Golf Magazine. In his role, he is responsible for editing, writing and developing stories across the golf space. And when he’s not writing about ways to hit the golf ball farther and straighter, the Milwaukee native is probably playing the game, hitting the ball left, right and short, and drinking a cold beer to wash away his score. You can reach out to him about any of these topics — his stories, his game or his beers — at nick.piastowski@golf.com.