Multiple Major semi-finals are always an excellent indicator of a prominent season. The most significant players of the Open era have achieved that many times over their careers, with eight names topping the charts. They have reached at least two Major semi-finals in seven seasons or more, raising the bar for the young guns who will target this achievement in the upcoming years.

Stefan Edberg stands on seven seasons with multiple Major semi-finals, followed by Pete Sampras, who is on eight. Andre Agassi and Ivan Lendl had nine, while Jimmy Connors stands alone in the fourth place with 11. As always, the highest positions in almost every record related to Major events are reserved for Novak Djokovic, Rafael Nadal and Roger Federer.

The Swiss star tops the charts with 14 seasons with multiple Major semi-finals, accomplishing that between 2004 and 2019. Roger had only two seasons without this feat during that period (2013 and 2018), and he still keeps Novak Djokovic and Rafael Nadal behind .

Novak has been the most consistent player at Majors since 2011. He failed to reach two Major semi-finals only in 2009 and 2017, and he seeks another good season to match Roger’s record. He will try to catch the Swiss in the rest of the season if he advances into the last four at Wimbledon and the US Open, although he can not compete in the USA by the current pandemic rules.

Rafael Nadal has been a player to beat at Majors this year, claiming two titles and distancing himself from his closest rivals at the top. Thus, Nadal became the 13th player with multiple semi-finals in 13 different seasons, sharing the second place with Djokovic and setting his eyes on Federer’s record in 2023 if he remains competitive.

Rafael Nadal is the third player with two Major SF’s in different seasons.

The Spaniard had two Major semi-finals every year between 2006 and 2014 before extending his streak in 2017. The previous two seasons were not the best for Nadal’s standard, and he raised the level again in 2022.

Rafa advanced into the Roland Garros semi-final following a 6-2, 4-6, 6-2, 7-6 victory over Novak Djokovic in four hours and 12 minutes. Nadal built an early advantage in three out of four sets and stood as the most determined player on the court after firing almost 60 winners.

Rafa came from 5-2 down in the fourth set and fended off two set points in game nine to prevail in the tie break and seal the deal en route to his 14th Roland Garros title. 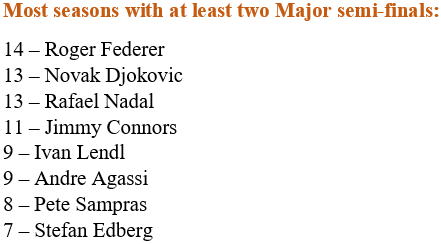