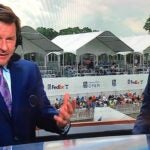 Nick Faldo and Jim Nantz on Saturday during CBS’ broadcast of the Canadian Open.

Nick Faldo, Jim Nantz and CBS started its intro into its PGA Tour coverage with kind words about its leaderboard and the golf course they were on.

They then talked for three minutes, mostly in blunt fashion, about “a story that is also out there.”

In CBS’ first televised comments about the upstart, Saudi-backed LIV Invitational Series — which finished its first event on Saturday about an hour before the broadcast of the Canadian Open — Nantz noted the world rank (126th) and lack of recent success of Charl Schwartzel (no wins in six years), the event’s champion, then Faldo took swings at the format and the players, and Nantz said he felt ‘betrayal.’ The tone could be considered both surprising, given the network’s previous silence, and anticipated, considering CBS’ long relationship with the Tour, which Nantz did disclose.

After noting that the Tour this week had suspended its members who played in the event and showing press conference clips of Rory McIlroy and Justin Thomas talking of the series, Nantz asked Faldo for his “thoughts.”

“No. 1, you saw those faces, you can’t feel good being a major champion to be suspended from the Tour,” Faldo said. “We’ve got two totally different golf tournaments. One, we play for tournaments and national championships over here. And the LIV Tour is what, 54 holes and no cut, shotgun start, you know, sounds crazy.

“And the other thing that is very noticeable is the players that have left. Obviously they’re in mid-40s, they’ve been out here on Tour, they’ve been battling away and they probably know they can’t win out here against these youngsters. So they’re taking the easy option to go over and try and win a boatload of cash.”

Nantz then noted CBS’ broadcast partnership and that “we’re proud of it,” before saying that he and others felt misled.

“But I think about — what I keep hearing from people, too, is a sense of disappointment, even a little betrayal,” Nantz said. “They’ve always been told the story — and I know it was true — that at some point in their careers the dream was to play on the PGA Tour, build a legacy, build your future financially.

“I think all of the players are proud of that because you always get thanked and they say, oh, great to see you back again,” Faldo said. “You know, I’ve been out on the Tour for decades and now decades with TV as well, and you love it out there. When you’re a kid, this was your dream, to come out and compete against the best and it’s what you do.”

At this point, Nantz stopped the conversation, there was a three-second pause, and CBS showed Shane Lowry hitting a putt.

Nick Piastowski is a Senior Editor at Golf.com and Golf Magazine. In his role, he is responsible for editing, writing and developing stories across the golf space. And when he’s not writing about ways to hit the golf ball farther and straighter, the Milwaukee native is probably playing the game, hitting the ball left, right and short, and drinking a cold beer to wash away his score. You can reach out to him about any of these topics — his stories, his game or his beers — at nick.piastowski@golf.com.